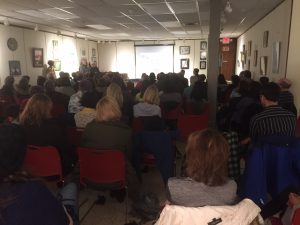 We would like to thank the 150 concerned citizens who came to the Mount Pleasant library for the screening of Salam Neighbor, a moving documentary that follows two young American men who spend a month in a Jordanian refugee camp near the Syrian border to understand and document the human tragedy of today’s refugee crisis.

The Library co-sponsored the event with Films on Purpose.  The screening was followed by presentations by Felice Gelman and Andrew Courtney of Hudson Valley “Refugee Call to Action” for Refugees and Kathie O’Callaghan of Hearts and Homes for Refugees.  They spoke about their own experiences with resettling refugees in Westchester County, and about possible courses of action in response to the administration’s immigration ban. The speakers offered some suggestions of organizations to contact for more information on how to volunteer or make contributions, some of which are listed below:

Hearts and Homes for Refugees
http://www.heartsandhomesforrefugees.com/

Good morning, many, many thanks to your Films On Purpose group for the insightful film and good discussion last evening. Kathie O’Callahan of Hearts and Homes for Refugees mentioned the helpful suggestions HIAS has for those who want to do more and to build on the outstanding capacities our country has in place to help refugees wherever they are and especially with resettlement in our Westchester communities.

Please see the action note and attachments below from Rachel Mayer, HIAS’ Special Resettlement Project Coordinator, with whom we have been working. I would like to highlight several actions for advocates and doers in addition to what Rachel has listed.

1- Once the 120 day suspension is lifted, be ready to volunteer and support materially the very fine authorized agencies set up for resettlement in Westchester and nearby areas, especially Catholic Charities, HIAS, Church World Service, IRIS (Integrated Immigration and Refugee Services) in New Haven, and IRC (International Rescue Committee) in NYC area.

2- Connect with the local clusters of faith and civic groups who have been coming together for the past year to partner with the refugee agencies to create local teams to take on resettlement responsibilities in the way Hearts and Homes is doing in lower Westchester. The Westchester Refugee Task Force (WRTF) is the active coordination point for that; email Mary Refling at westchesterrefugeetaskforce@gmail.com or see the blog.

3- Beyond protests and criticisms of recent presidential executive orders, advocate with our elected representatives at all levels and in all parties to restore and enlarge the outstanding and very capable US refugee resettlement program working through nine authorized agencies (like Catholic Charities) across the US who have a terrific legacy of partnering with local communities. That means allowing in Syrians asap and as a first step increasing the overall number back to over 100,000 refugees each year and then many more. While the film’s focus was on the acute situation in Syria, refugees from other countries deserve our support.

4- Being ready to contribute to the non-profit groups such as the ones mentioned in the film and in this note and UN agencies such as UNHCR and UNICEF who are doing everything they can to help support refugees right now not only in camps but in neighboring countries such as Lebanon. Also, advocate with Congress and the administration to maintain federal funding of the US agencies such as USAID and the State Department programs helping refugees and the UN specialized agencies who are the first line of relief for refugees fleeing persecution.

A note from Rachel Mayer

As you are all aware, Friday, January 27th President Trump signed a revised version of the Executive Order, concerning refugee entry into the United States. Below is a summary of the updated provisions:

1.The U.S. Refugee Admissions Program (USRAP) is being suspended for a period of 120 days for all refugee populations. Beginning on February 3, all refugee travel will be cancelled until further notice.

2.Syrian refugees have an indefinite bar on being resettled, until such time that the President determines sufficient changes have been made to the USRAP.

3.The Executive Order bars entry of individuals from Iraq, Iran, Syria, Somalia, Sudan, Yemen, and Libya into the U.S. This applies to refugees, asylum seekers, tourists, visa holders, and Green Card holders from these seven countries.

5.After 120 days, the program will prioritize the resettlement of religious-based persecution claims of religious minorities.

6.The Secretary of DHS will examine existing law to determine the extent to which state and local jurisdictions may have greater involvement in determining placement or resettlement of refugees.  This point implies that the Administration is looking into the legality of states and local governments opting out USRAP (Section 5, Paragraph G of EO).

We advise all those who are from one of the seven countries listed in the EO (Iraq, Iran, Syria, Somalia, Sudan, Yemen, and Libya) and that are not yet U.S. citizens to not leave the country. Due to the EO, individuals from these countries will be barred from entering the U.S. or could be prevented from getting on flights to the U.S. or detained upon arrival at a U.S. airport.  As of now, the EO will have no effect on the legal status of refugees already in the U.S.. Refugees are eligible to apply for green cards after 365 days in the U.S. and citizenship after five years, provided that they meet all other naturalization requirements.

What you can do:

There has never been a more critical moment to show the Jewish community’s support for refugees. You can take action and publicly demonstrate your commitment to welcoming refugees by attending local events today, tomorrow and this week. Find an event in your area (we’ll keep updating this list). Print a HIAS sign to bring with you.

If you cannot attend local events, print and put a the sign in the window of your house or your place of worship.

Here are some other ways you can take action:
Send a message directly to President Trump. Join the thousands of HIAS supporters who have told him that we will not stand for this.

Call your Member of Congress to express your outrage. If you can’t get through, send a message through their website.

Organize your community to take action for refugees by joining the HIAS Welcome Campaign.

Join the more than 1,700 rabbis who have signed a letter in support of welcome (or ask your rabbi to sign).

Make a donation to support our work in protecting and welcoming refugees.

Share HIAS’ graphic on Facebook and Twitter to spread the word. Make sure everyone you know understands the devastating effects that Trump’s actions are already having on men, women, and children around the world.

We at HIAS appreciate all your efforts to support refugees and refugee resettlement.

Thank you for being partners in this fight,
Rachel Mayer, Hadas Yanay, Alla Shagalova, and Merrill Zack